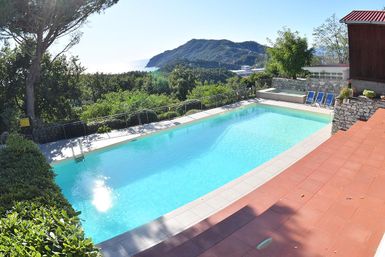 Where would you like to go?
Search among 10 structures.

Where would you like to go?
Search among 10 structures, or Filter the results

Italy's Cinque Terre is a national park area encompassing five fishing villages – Riomaggiore, Manarola, Corniglia, Vernazza and Monterosso – each perched on the rocky cliff-sides of the Ligurian coast, overlooking the blue Mediterranean Sea. Recognised as a Unesco World Heritage Site, what makes this region special is that cars are excluded, and the most effective form of travel within Cinque Terre is the 19th-century railway, a low-cost option linking all five villages. Alternatively, visitors can explore the terrain via a wonderful network of winding footpaths, the most famous of which is the Sentiero Azzurro (Blue Path). Like the railway and the local ferry boats, this path also connects all five Cinque Terre settlements.

Cinque Terre's maritime medieval villages have spent long years under the Mediterranean sun. Monterosso, to the north, was the first to be settled in 643 AD by fugitives from the interior fleeing marauding invaders. Next, Greek refugees from Byzantium arrived to establish Riomaggiore in the 8th century, with later communities appearing at Vernazza, Corniglia and Manarola. Much of the antiquities and architectural heritage preserved in the villages dates from the Renaissance onwards, and the unique Cinque Terre landscape of man-made cliff terraces and tiny fields with stone-walled contours bears witness to centuries of unrelenting human toil.

The best hiking trails are the coastal Sentiero Azzurro (12 km), which is popular and fairly undemanding, and the higher-altitude Sentiero Rosso (38 km), a longer Porto Venere – Levanto route offering panoramic vistas but requiring more experience and greater fitness. Good swimming is available at all Cinque Terre locations – Monterosso boasts two sandy beaches – and the coastal waters are a wildlife haven. Cinque Terre's Ligurian cuisine is awash with traditional fragrances and flavours, and the local 'Cinque Terre' and 'Sciacchetrà' wines are unique to this area.